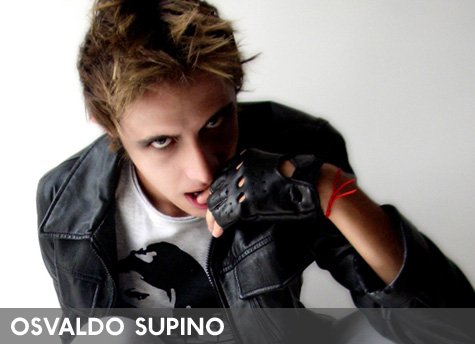 Meet Osvaldo Supino – he's an Italian popster who's been having a wee bit of success with his latest  electro track "Calling" in his home country of Italy.  I can't tell you how many times Osvaldo has popped up on my computer screen over the last year.  He is one of those international pop acts that I didn't pay too much attention to, but now with the audio delight that is "Calling" constantly in my mindscape as of late, I've finally developed a small appreciation for the little waif…who fancies himself as a bit of sex symbol.

Osvaldo even has his own calendar for your viewing pleasure and by visiting his MySpace you are treated to more than a few images of him in his underwear…if you're into that sorta thing.  Personally, I'm more interested in his very suprising version of Culture Club's "Miss Me Blind" rather than his crotch shots, but hey – that's just me.  I jest, It's all good stuff and if you have a spare minute or two to download "Calling" – I suggest that you do.  I have and I'm enjoying it – even if his imagery is a little too 'Calvin Klien' for my tastes.