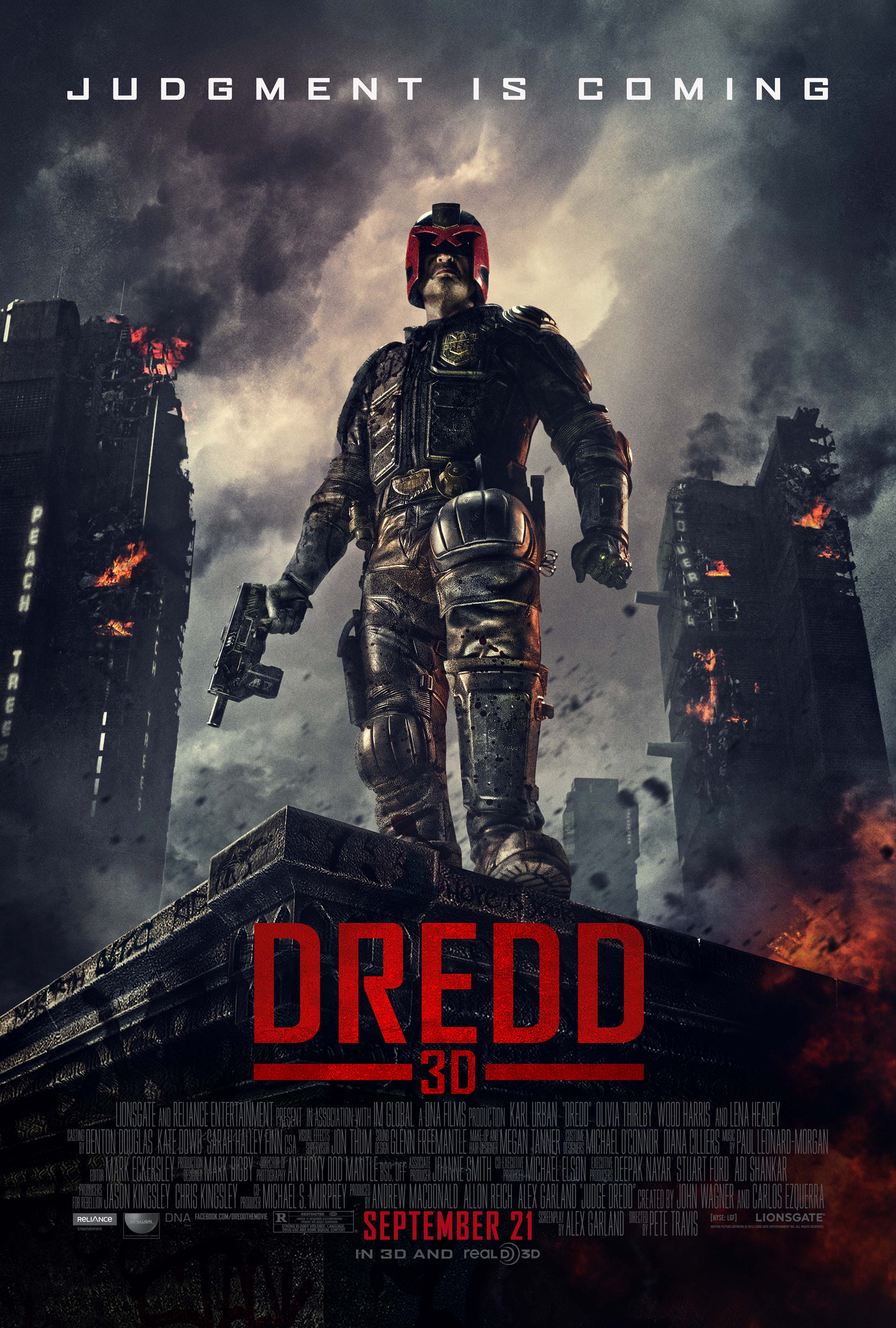 At the end of October, the comic book world lost one of its greats. Steve Dillon, the artist famous for his runs on the Punisher, Preacher, and Judge Dredd, tragically passed away at the age of 54. Dillon’s death naturally calls his work to mind, and we can’t help but be reminded that the film adaptation for Judge Dredd wound up being somewhat underrated. With Dillon’s memory in mind, let’s take a look back at 2012’s Dredd.

In this movie, the United States has become a post-apocalyptic wasteland populated by “mega-cities” that span entire regions of the remaining country. In Mega-City One, which takes up a chunk of the East Coast, over-powered police called Judges are in charge of maintaining the law. They seek out, capture, sentence, and carry out judgment on criminals in a dark landscape overrun by dangerous drugs and the people who peddle them.

In this environment Judge Dredd (Karl Urban), who is training a young psychic and prospective Judge named Cassandra Anderson (Olivia Thirlby), is tasked with investigating the deaths of a few drug dealers in one of Mega-City One’s massive slum towers. They discover that the drug dealers were murdered by being tossed from the top of the tower after being injected with Slo-Mo (a drug that slows down the user’s time perception). Dredd and Anderson wind up in a fight for their lives against Ma-Ma (Lena Headey), an ambitious drug lord that essentially runs the tower.

All in all it’s a pretty straightforward plot that is clever in execution but somewhat lacking in intricacies. What makes it wonderful is that it’s one of the most self-aware comic book movie adaptations you’ll ever find. Teeming with violence and managing to use 3D to strong effect, Dredd isn’t trying to be anything it’s not. It’s a dark, bombastic adventure that makes you remember how you might once have imagined the action playing out while reading a comic. Karl Urban was perfectly cast, and somehow made the bottom half of his face more stern and expressive than most any Batman we’ve ever seen on a big screen. And Lena Headey’s turn as the deranged and dangerous Ma-Ma makes you realize the woman could do evil long before she became Cersei Lannister on Game Of Thrones.

The film did fairly well with critics, scoring high marks at aggregate ratings sites like IMDB and Rotten Tomatoes. Fans also generally enjoyed it, and it even managed to spawn a video game. “Judge Dredd” is an online slot reel with a bold and brooding style and an ’80s-inspired soundtrack, more closely relating to the old comics than to the 2012 film. Nevertheless, it’s packed with illustrations of Mega City One, Judges, and the relevant nasty weaponry, all of which are used to enhance the quality of the reel to great effect. The game is built for casino sites, but stands out a bit in that many of its counterparts are based on more prominent comic properties (such as Marvel’s Avengers).

Beyond this game, Dredd also lives on through incessant calls from fans for a sequel, or at least some kind of follow-up project. Urban himself has been instrumental in trying to make this project happen. Over the summer conflicting reports about the status of a new adaptation of the comic confused fans as to the status of the project.The feeling right now is that if there is going to be be any kind of sequel it will be on a streaming platform like Amazon, Netflix or Hulu. That said, we still have no idea if there will be one at all any time soon.

Regardless, Dredd is a project that deserves another look from a lot of people. Urban has called the film’s inability to recoup its production budget as a marketing failure, and he may be right. Most people who actually saw the movie seemed to thoroughly enjoy it, and it has proven to have life beyond its 2012 release making it truly one of our most underrated comic adaptations.