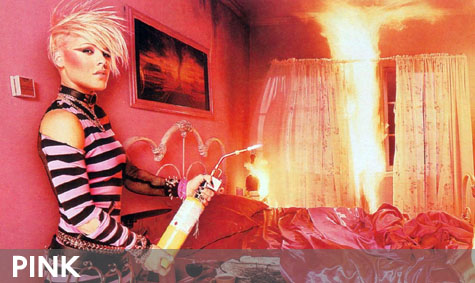 This bit of news landed in our inbox today and I thought it was really interesting actually.  Looks like Katy Perry and her girl-kissing antics don't measure up with the lesbian community – they prefer Pink instead.

Not that anyone's sexuality is really that important, but I find it interesting to know who is the favourite amongst the girls who like girls catergory…If I were a lesbian, I'd prefer Pink too…

Singer Pink is top of the pops when it comes to lesbian love, with nearly half (46%) of British lesbians naming her ‘most lesbilicious straight celebrity’, according to a major gay poll released today. And even though Pink claims to be straight, her lesbian fanbase think otherwise – a third (31%) believe the recently-divorced singer will come out of the closet in 2009.

Hundreds of lesbian and bisexual women took part in the poll, which was conducted by lesbian news website www.Lesbilicious.co.uk.

Pink’s "So What" was also named ‘lesbian anthem of 2008’ by more than a third (39%) of lesbians. Katy Perry might have kissed a girl and liked it, but the feeling isn’t mutual – only 3% of lesbians think she’s lesbilicious. However, although lesbians might not like the singer, they love the songs – "I Kissed a Girl" was named lesbian anthem by a third (33%) of lesbians, and "Hot n Cold" was the anthem for 5%.

When it comes to genuinely lesbian/bisexual musicians, the most lesbilicious are Canadian singer-songwriters twins Tegan and Sara. The gorgeous, openly-lesbian musicians won 29% of votes, ahead of Leisha Hailey (23%) – who is not only an actress in The L Word but half of music duo Uh Huh Her – and old-timer kd lang (14%). Bisexual folk star Ani DiFranco came in fourth with 13% of the vote, and Beth Ditto of Gossip and Tracy Chapman came in fifth and sixth, with 10% and 6% of the vote respectively.

“Pink’s got the hair, the tattoos and most importantly the attitude – no wonder lesbians love her! Hopefully it’s only a matter of time before she realises how much more fun girls are and comes over to the dyke side.

“It’s not surprising that only 3% of lesbian and bisexual women in the UK think Katy Perry is lesbilicious – she’s all talk. She sings about kissing girls but that’s all there is to it. Madonna and Britney did the lesbian thing back in 2003, and we’re bored now. Britain’s lesbians have a message for Katy Perry: give us the real thing or get out!”