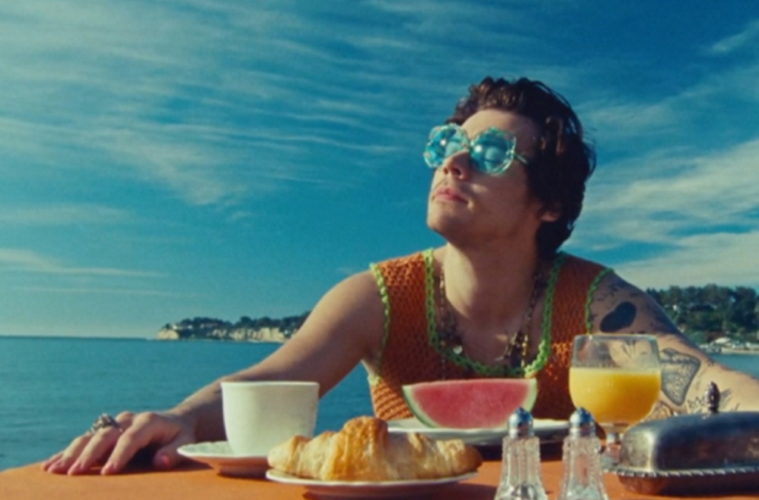 Feelings have been running high about the Harry Styles track “Watermelon Sugar” ever since being released way back in November 2019. In contrast to what nearly everybody felt about the track, which is lifted off the splendid “Fine Line” album, I didn’t hugely, take to this song at first. There were other tracks on the sophomore album release which I better connected with, like “Adore You,” “Falling,” “Treat People With Kindness” or “Sunflower, Vol.6.” When released “Watermelon Sugar” prompted a lot of speculation about its meaning. Did Harry really write a song about sexual foreplay well, guess he did, right? As, when, being pressured for answers, he has always found some cute way to dodge around giving a candid answer. I very much doubt that if the tour had gone ahead like was intended (now pushed back to 2021,) we’d still have no closure on the matter.

After a small amount of teasing, the “Watermelon Sugar” music video has appeared. And guess what, Harry is still remaining playful about the lyrical intentions of the song. Before the clip begins, viewers are advised that “This video is dedicated to touching.” Indicating that Harry is ramping up the message about being vigilant with our social-distancing. While it’s a good point to take on board, isn’t this also just another way of ducking away from facing more awkward questions about the track. Yes, Harry Styles, I see what you’ve done here, well played young man. As a creator of the track “Watermelon Sugar,” you have the upper hand. (Although, he’s not so quick thinking or good at telling white lies as Sophie Ellis Bextor. Who, publically explained to her kids that the Prince track “Gett Off” which she covered during her recent Kitchen Disco live stream, was about a mum telling her child to get off a climbing frame. Now that was genius and being a good mum.)

The clip filmed in January on a Malibu beach shows the singer, tucking into, what else, but plump slices of watermelon. He’s surrounded by a gathering of ladies and given their facial expressions, whenever they catch a glimpse of or bite into a piece of the juicy fruit, they have a really good time. When I was watching through this clip, I know I was supposed to be concentrating on hidden meanings and such. As there was never any real doubt in my mind what the track was about anyways, I have to say, I was more intrigued about Harry’s beach wardrobe. The orange, with yellow trim, crocheted vest-top to be exact. I mean, what a look and I don’t know what to make of it to be honest.

Meanwhile, in other “Watermelon Sugar” music video related news, the Harry Styles fans have left some treasure, responses to the clip on the YouTube channel. With nothing but re-runs on the TV tonight, the Stylers have my Monday evening entertainment dilemma’s sorted. And I thank them.