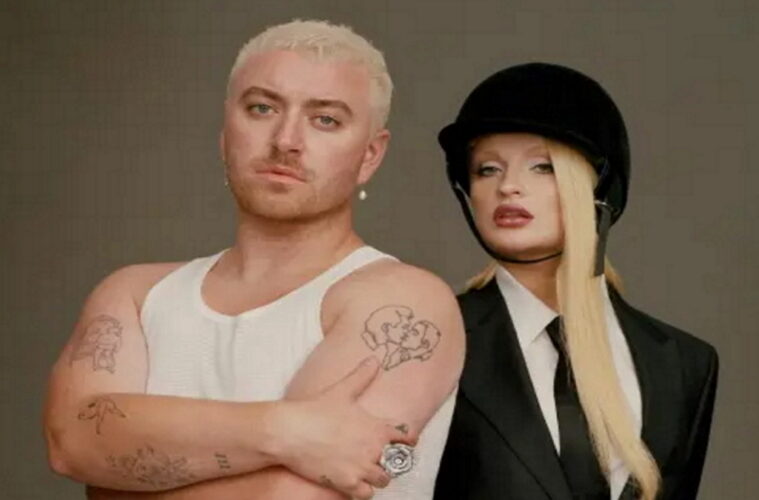 Was it ever in doubt? Much as I suspected. “Unholy“, the earworm-worthy dance bop from Sam Smith ft. Kim Petras shot right to the top of the UK singles chart. What a time for the transgender and LGBTQi+ communities. (An openly transgender pop artist at #1 in the UK is a big deal.) Upon the song’s release last week, (where I described “Unholy” as lyrical filth driven by a vacuous throbbing bassline and hypnotically mesmerizing, melodic harmonizing). I also discussed the departure in the sound of Sam Smith, as well, (see review here). Since the video has now dropped. Subsequently, it increasingly appears the music style isn’t the only aspect they have shaken up.

For the epic Floria Sigismondi-directed music video Sam is seen openly embracing their gender neutral identity more predominately for the first time. The clip is styled in the vein of Moulin Rogue meets a Madonna mid-90s music video. This is where we see Sam slip out of their customary crooner’s suit, and where we see them dressed up in leather (a harness) for the first time. Whereas, similarly Kim Petras, is seen portraying a femme fatale, a role she evokes assuredly and with aplomb.

Likewise. Both the song and the video relays a story about calling out the unfaithful activity of a cheating husband. Above all, the music video additionally has a secondary purpose, (a more important one in my view), where the clip makes a powerful statement about identity and gender. Everyone appearing in this music video is expressing themselves freely and without inhibitions. The importance of their clothing choices reveal their kinks and preferences, as they are seemingly wearing them as badges of honor.

Be sure to spot these drag queens! Making cameo appearances in the clip is Drag Race USA glitterati Gottmik and Violet Chachki. (Foremost, their inclusion in the music video is important and more significant than their cameo roles, initially suggest). How so? Remember, Gottmik became the first openly trans man to compete on RuPaul’s Drag Race USA. When it comes to Violet Chachki, they present as gender fluid and is an active a part of the burlesque scene.

The Floria Sigismondi-directed music video for “Unholy” is teeming with many LGBTQi+ references. Isn’t it cool to have something promoting diversity and representing the queer community riding high at the top of many music and music video streaming charts worldwide? Sam and Kim did this!

Frankie Goes to Hollywood’s “Relax” similarly became a precedent for queer representation in pop music. Of equal importance, “Unholy” in the same way is likeliest to be remembered as a historic shift in trans, non-binary and gender fluid awareness in mainstream pop, for years to come.