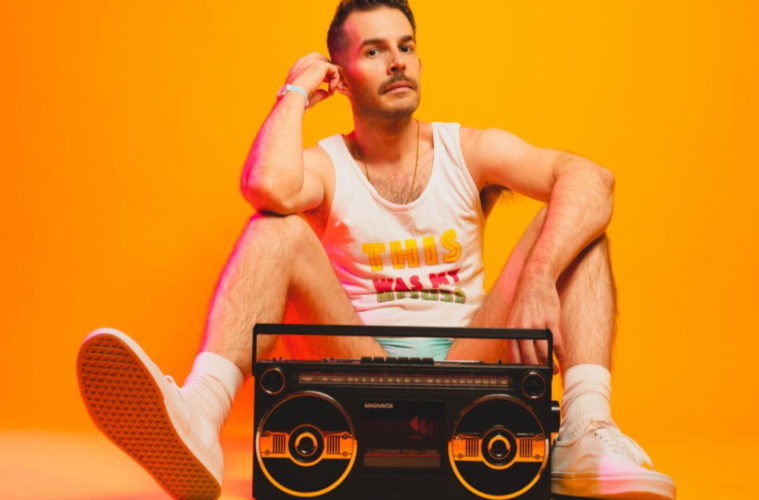 What a ray of sunshine Bright Light Bright Light, is! Rod Thomas recently announced details of this upcoming fourth studio album, titled “Fun City” (out September 18th.) This is brilliant news to me, as the release arrives during my birthday week, and also as a BLBL fan, of course. As someone who always steps up to the gate, I feel we are pretty much guaranteed some very good, pop and synth-pop tracks from Rod leading up to the long-player release. There is no time like the present to start the disco-ball rolling on “Fun City,” and Rod goes about this in a big way with launch single “This Was My House” featuring Madonna backup singer duo, Niki Harris and Donna De Lory.

I am wholly enjoying the 90s vibes of this track, and the dancefloor groove is a bit of a different style that we haven’t seen Bright Light Bright Light tackle in some while. With Rod relocating to NYC some years ago, it feels right to hear some of his adopted home city influences come through in his new work. New York is renowned for having some of if not the best nightlife in the world. Coloured in rooftop bars and clubs. The bright lights and vibrancy are the pulse, which drives this part of the USA. These influences stand out on “This Was My House.”

Written as an ode to LGBTQ+ safe spaces. The Tyler Jensen directed music video features Bright Light Bright Light joined by a cast of New York nightlife legends and staples including Glow Job, The Illustrious Blacks, Angelica Torres, and more. During the promotion cycle for last album “Choreography“, I saw Rod brimming with more and more confidence in his music videos. On this latest one for “This Was My House” Rod is a mood of appearing a little bit on the camp side of life. Clutching and caressing his disco ball, oh matron, what a carry-on, but also absolutely the tonic of fun and joy which brightened up my weekend. As not being able to go, out, out in reality is starting to feel quite pants, but necessary. On the upside, a bonus of being in quarantine is that I got to go to (albeit by livestream) Romy and Michele’s Saturday afternoon tea party (the DJ event Rod hosts weekly in NYC.) Listening in on the live streams is rapidly becoming one of my most favourite new pastimes keeping me sane when staying in, is the new going out.