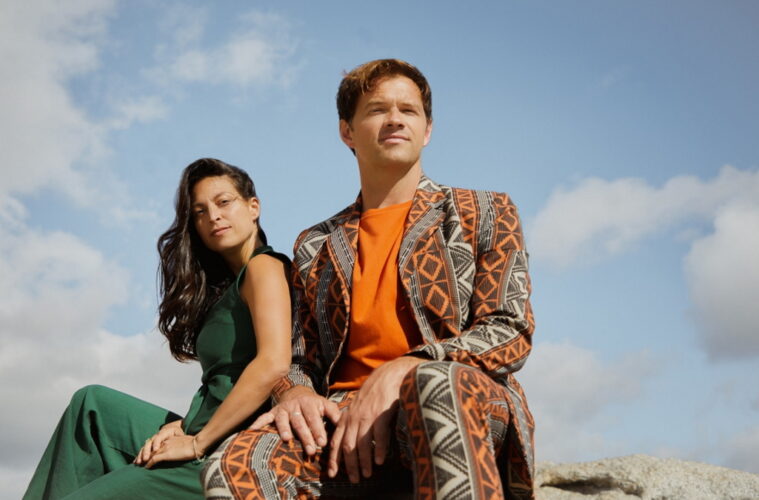 It didn’t escape my notice a new album, “Utopia” from the synth-pop / indie-alternative project St. Lucia came out on Friday. Following my previous interest in them. In the tracks such as “Dancing On Glass“, “Physical” and album “Matter“, the husband and wife duo are still on my radar. And where I subsequently noticed that the music was growing evermore funky, since also providing glittery, synth-pop flavours and dance-pop grooviness.

As opposed to many new acts grabbing onto the latest hyped sound. Saint Lucia has always tried to latch onto nostalgia. As they unleash their fourth album, “Utopia“. I recognise these as the distinctive throwback vibes that have become the lifeblood of the duo. Helping them to carve out a four-album-long career thus far.

The track with the focus graced upon it at the moment is “Gimme The Night“. This is where St. Lucia’s attention falls firmly on the synths and 80s pop ambience once again. Needless to say, because of this, I quickly became interested in this stellar synth-pop song. Although it is the Nicole Lipp-directed music video which sparked my interest more in this track.

At the moment, I am craving music and music videos that bring me escapism or those that explore points of view conveyed in a tongue-in-cheek way. The “Gimme The Night” video has this. The song was written about the pitfalls of influencer culture. Has a video featuring the model Ireland Basinger Baldwin. Showing her barricading herself in a local convenience store as she escapes from the relentless paparazzi. The clip flips the serious and sinister side of the situation into a fun-filled scenario. Reminding us there is a human (sometimes a vulnerable one behind this mask) dealing with the fame that comes with celebrity.

The duo’s Jean-Philip Grobler shares, “Lyrically, ‘Gimme The Night’ is a tongue-in-cheek commentary on the lifestyle of influencer culture, which we lived at different points. Being in a band, you’re flying all over the place. Everyone thinks it’s a totally glamorous life on social media. It’s glamorous sometimes, but most of the time, it’s not the jet-set life you imagine.”

I find it interesting to see how different musicians worked during the pandemic. And I am enjoying seeing the new songs that were created during this time, now emerging. So far, a lot of the music coming out is introspective in tone or deals with personal growth. While this is both fine and understandable. It is good when I hear about music that was made from a happier place. And to know that not everybody was making music because of looking inwards.

Our vision for ‘Utopia,’ emerged as we were working on it. To make an album that was the antidote to the last few crazy years, while also acknowledging what we collectively went through. We could have just made a sad record. We could have pretended we were happy the whole time. But both of those would’ve been a lie. We needed to somehow process the ambiguity of that experience, and the making of ‘Utopia’ was our therapist.”