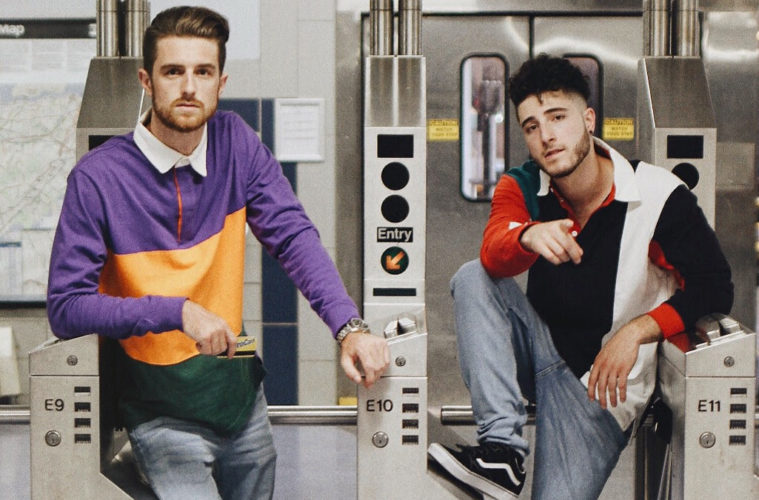 Watch “Complicated” by Fly By Midnight

The other day while at home casually sitting in my living room, I was startled by a passerby on the street outside, walking past carrying a boombox and blasting unrecognisable pop music all over the neighbourhood. In the age of modern portable technology devices, such as iPods, mobile phones, tablets and streaming audio platforms. I didn’t think carrying, weighty objects like boomboxes was still a thing. I am accustomed, as most of us are to hearing the familiar sound of ‘tsk, tsk, tsk,’ coming from people’s earbuds, when on public transport and playing music at volume. However, I haven’t seen or heard a boombox in my neck of the woods, for years. Maybe it is some strange coincidence or something spookier, that an introduction to NYC duo, Fly By Midnight’s “The Boombox Series” mini ep found it’s way, into my email pile. As a fan of good retro pop reimaginings in general, the New Yorkers opening track, a cover of Avril Lavigne’s “Complicated” caught my attention.

The Fly By Midnight pop partnership of former MTV’s Dream Bigger reality star and multi-instrumentalist, Justin Bryte, and producer/song-writer Slavo has been recording and releasing music both original and covers since forming in, 2015. Yet, “The Boombox Series” is the first time they are putting out a bite-size track collection. The series, see’s the boys interpreting three tracks, “Everywhere” originally released by Michelle Branch, Rihanna’s runaway breakthrough hit “Umbrella” and “Complicated” the signature song of Canadian pop rocker, Avril Lavigne. Fly By Midnight’s take on, the latter track is the best of the bunch, in my opinion, I am particularly, impressed with the disco, electronic, style of it. And overall, I feel the duo have added a little extra effort on the cover.

In the music video, the guys have taken their boombox to their local bar where they have a jam session of the song. The packed out bar full of folks don’t appear to be impressed by the impromptu music entertainment, but I can tell you for nothing I am, and this cover song rendition impressed me.