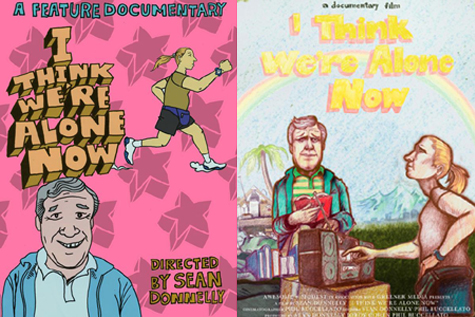 EQ diva Tiffany will be starring in a new indie film called ‘The Isolationist’ which is scheduled for release in 2008.  It’s so fab that Tiff is expanding more into film – some may remember that she voiced the character of Judy Jetson in the animated film for ‘The Jetsons’ quite awhile ago.

Here is a synopsis of the film:  Thomas Shore needs some time alone.  He’s planned a relaxing vacation at the beach – away from his job, co-workers, boss, friends, and family.  But when he arrives at his destination, he finds these people pursuing him in aggressive and increasingly absurd ways.  Featuring a quirky cast including Tiffany ("I Think We’re Alone Now), "The Isolationist" is an absurdest dark comedy about trying to get away…and failing.

Here are some quirky pics of Tiffany from the film!  She looks great!

Also – I didn’t think this documentary film ‘I Think Were Alone Now’ would ever see the light of day, but apparently it is.  It’s even been shortlisted for this years prestigious Slamdance festival in the documentary category.  ‘I Think Were Alone Now’ delves into the lives of Jeff Turner and Kelly McCormick who have been labeled by the media as obsessed psycho Tiffany fans.  The re-cut trailer to this film is a little eerie but highly highly interesting.  As a hardcore Tiffany fan myself over the years, I’ve ran into Jeff and Kelly on the message boards and the like.  It will be interesting to see if this documentary will be well received by the public and spark some new interest in Tiffany’s music.

(Note – EQ was not asked to star in the film – hehehe) I Think Were Alone Now – Trailer