The EQ Interview With Dangerous Muse Part 1 – “It’s our intention to test the censors, to find the boundaries and tastefully tread over them.” 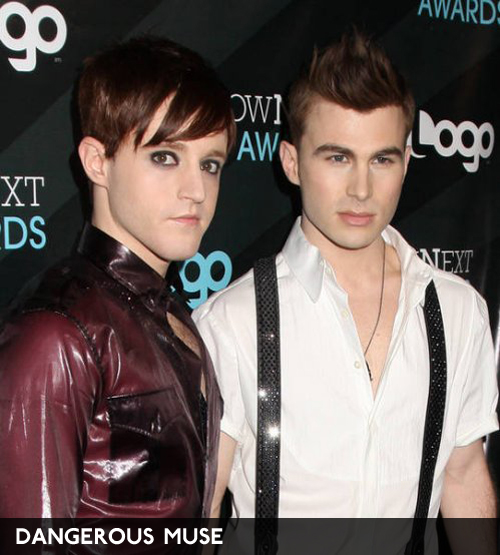 It's no big secret that I'm a huge fan of Dangerous Muse.

Over the last few years, the sexy electronic pop duo have been thrust into internet stardom and thousands of hungry fans have been patiently awaiting the debut album which cannot get released fast enough.  With songs like "The Rejection", "Give Me Danger" and their latest single "I Want It All" offering up a taste of what's to come from the NYC hipsters, expectations are rising high and Dangerous Muse are sure to deliver.  Working with the likes of hitmakers Bloodshy & Avant and armed with an arsenal of style, attitude and effortless cool, we very well could see Dangerous Muse become major stars in 2010 right alongside Gaga and the Glambert.  The time is right.

In part 1 of our EQ interview with Dangerous Muse, we talk about their first two singles, our all around mutual love for Ministry, that "oral" thingy at the Logo Awards and why we must be patient in waiting for their debut album to drop.  Enjoy!

Wello hello guys – welcome to EQ and thanks for taking the time to answer our questions.  Let's get right into it, we're you guys surprised at how quickly you garnered attention when your first single "The Rejection" came out?  It was like you were overnight online pop stars…

Furey: Hey, Raj. We think you’ve got a great blog and are happy to answer some of your questions. Yes, we were definitely surprised about "The Rejection" going to #2 on the iTunes Dance charts and all of the initial press we got.  It’s amazing how one song can kind of turn your life around.

Furey: I’m inspired mostly by real life occurrences – by situations that my me and my friends get ourselves into.  None of my lyrics are meant to be taken too literally.  There is always a double entendre that you shouldn’t be quick to overlook, but "Give Me Danger" pretty much spells it out for you.  It is the precursor to “Homewrecker”, a song from our forthcoming album.

I was curious, what happened to the video for that song – it seemed like it was full steam ahead then suddenly we heard that it wasn't gonna happen…so what happened?!

Furey: Unfortunately we can’t talk about that.  There are lots of things that we wish we could divulge about the ugly guts of this pretty machine, but now is not the time for that.  It will all be in the book someday – when we are old and tired and only have stories to tell.

You guys even got a Delorean for the single cover – where did you end up finding a Delorean? I would think they are pretty hard to come by?

Tom: It was parked, abandoned and unlocked, on the film lot where we shot "The Rejection" music video. I insisted we take a few pictures in it. There was a cassette of Madonna’s "Immaculate Collection" in the tape deck. [Laughs] 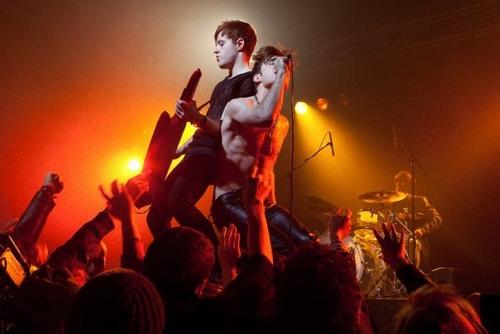 Not too many people know that your song "Every Day Is Halloween" was actually a cover of a Ministry song. Are you guys big fans of Ministry?

Tom: I’m a huge Ministry fan.  When I heard them in high school, they were way too hard for me even though I was listening to a lot of Nine Inch Nails.  Then about three years ago, I became obsessed with their first album, "With Sympathy".  It sounded like a lost Depeche Mode or New Order record to me.  From that I gradually got into more and more Ministry.  Next were the Wax Trax 12” singles, including "Everyday Is Halloween", and then "Twitch" and so on.  Ministry and all of Al’s Wax Trax side projects are some of my favorite music now but I cut off Ministry when they become too metal for me with "Psalm 69".

Furey: Yeah, Ministry is one of the bands that Tom and I agree on.  There aren’t many.  They had good industrial beats – as opposed to shitty ones - and a decent aesthetic.

You then performed "Secret" on the Logo Awards and got all oral with a microphone…it stirred up a bit of controversy. How did you guys come up with the idea of getting oral with a mic…was it rehearsed or kinda spontaneous?

Furey: It wasn’t rehearsed but I knew going into the performance that I would pull a gag.  It is our intention to test the censors, to find the boundaries and tastefully tread over them.  It’s not about doing something wild and crazy for the fuck of it.  It’s about sending a message that causes people to think – doing something unexpected that forces us all to reconsider the rules.

Tom were you worried about Mike sticking his mic down your throat?…that's actually kinda dangerous – kids don't try that at home…

Tom: It’s actually Mike’s go-to for shutting me up in rehearsals.

Brilliant!  And after all this hype, speculation and attention for Dangerous Muse…it all went quiet after that – what happened there?

Furey: It takes a long time to write and record your first album – more than you would think. Most people take two to three years.  Alicia Keys, for instance, I believe, wrote and recorded for about two and a half years. The difference with us is that we released "The Rejection" at the very beginning of our career and then went in to write and record everything else.  That’s why there has been such a time lapse.

I hear you're independent now – what's going on with your deal with Sire Records?

Furey: We want to avoid losing any more time between making the music and putting it in your ears.  We don’t want the middle man and any of the bureaucracy anymore so we are leaving Warner Bros. and taking our creative team with us.  Our manager has started an independent label called Scarce Goods. The name is inspired by a Trent Reznor quote.

How did the association and collaboration with Bloodshy and Avant come about? I can't imagine they are cheap to work with in the studio…

Furey: I sent Blood (Christian) a message on MySpace to say how much I appreciate the work he has done and to ask if he would be interested in working with Dangerous Muse. He wrote back and said yes! It was kind of as simple as that. The internet is a beautiful thing.