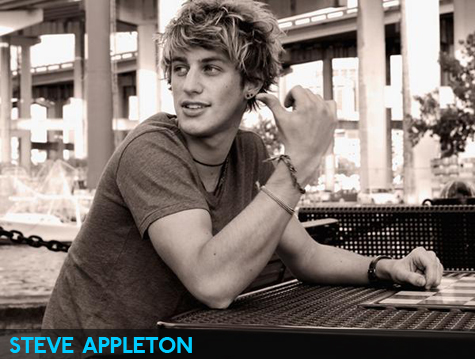 It's hard not to fall charmed to Steve Appleton and his blissful summertime songs.  "Dirty Funk" had such a whimsical fever to it that it was somewhat difficult not to find yourself in complete attention when the song and video attacked the airwaves.  The sky's the limit for this young man.  Having been number one for four weeks in Japan, Steve is off to charm the Japenese with his dirty funk pop songs and killer smile all the while unleashing his next single upon us – "City Won't Sleep".

EQ caught up with Steve to talk about the new single, being a "big in Japan" artist and what he thought about the new Bruno film…

EQ: Well hello Steve – how are you today?

Steve Appleton: Very well – thanks very much! The sun is shining and I'm happy!

So it seems you've had quite a wild ride since you burst on the scene with "Dirty Funk" – just browsing your Myspace and I can see you've been all over. What place on this popstart journey has been the most exciting for you and why?
Japan has definitely been the most exciting place because partly it's all kicking off over that at the moment. "Dirty Funk" has been number one for 4 weeks there now! It's just crazy to think it! It just excites me to go to new places and experience new cultures like Japan because it's SO different to like the English/Western culture – it's crazy. I went there for the first time a month ago so, I just fell in love with it and I'm going back next week! I was featured in a new acts thing over there and they just really identified with it as a summertime song – why wait until the winter. Let's do it now and they did it!

Are you excited to be one of those "big in Japan" artists?
Yeah absolutely! Hopefully a big everywhere artist, but happy to start in Japan!

So tell me about your new single "City Won't Sleep" – is it inspired about any specific city in particular? Vegas perhaps?
I haven't been to Las Vegas, however I am going to go for my 21st birthday which is in May which I'm looking forward to. The experience around that song though was when I was in Croatia. I was only passing through and had the most amazing night – I wasn't expecting it. It was like a "one night stand" or a one night extravaganza. The song is about trying to capture the excitement and experience of a city passing through it the first time. Passing through, you know you're not staying, it's not a holiday, you're just going through it with a one night stand…

Just watching the video – I'm curious if getting picked up on the street by a car of young girls is something that happens to you on a regular basis…
[laughs] It doesn't actually happen to me, no. However i'd wish that it did [winks]. It was just part of the video that I liked and the director liked, so it's in there…

Now I read in your bio that while all your friends went to University, you decided to knuckle down and finish your album. Now with the pop music industry being as fickle as it is, are you worried that maybe you should have gone to University instead?
I don't actually have any plans. No. I built my studio in my house and it's where I wrote the album, I'm always gonna have a studio in my house to allow me to write songs, whether it be for other people, for my music, or for other pop artists. I'll always be writing songs for the rest of my life. I don't have any other goals in my life. Hopefully success will come, but writing songs for the rest of my life is what I really want to do.

So you're album comes out August 31st – how excited are you that it's finally out there?
Very excited! It's the moment I've been working on for a long long time. It's something that's so close to me, I wrote it at home and all the tracks are 100% me and produced by me. It's just nice to get to share this opportunity with the world. 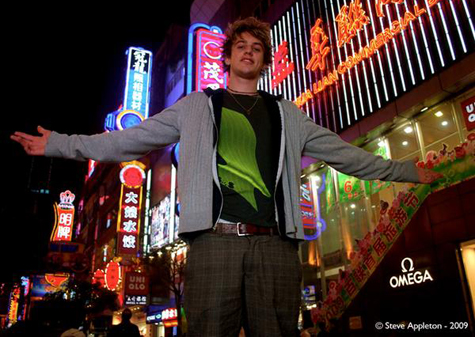 How is it different to the Paolo Nutini's and James Morrison albums?
Because it has elements of dance music, it has elements of reggae. It really collaborates lots of styles of music. I don't think it's been done too much before. It's so eclectic that it varies from any other artist around. Oops excuse me [sneezes]. So yeah, the originality of it really is that no one is mixing the amount of genres like I am. It wasn't my plan. I didn't go out and say "I'm gonna try and diverse music and make all these genres come into one". But it was something that was such an organic process because I listen to all sorts of different kinds of music, so it just happened so naturally. That's it.

I saw from your tweets that you went and saw Bruno the other night…What did you think of it?
Absolutley loved it! It wasn't as funny as Borat. It was more outrageous than Borat, but not as funny. But it was very good. I liked the bit where he goes to the talk show and it's very densly populated by black people and he's just being himself. They are just in shock though – they can't believe if he's quite for real. I do wonder though how much it's staged. Is it 100% genuine or is it staged? I'm not too sure. He's almost too unbearable to be true isn't he?

So how did the iTunes fesitaval go over for you?
Really really good gig. I had a brass section as well! Lovely group of people. The Hooseirs have quite a similar fan demographic to myself so I think we put on a really good performance and it was a lovely night. The venue is amazing! Proper venue. If I could see one of my idols live – I'd love to see them at The Roundhouse. It's big but small enough to be intimate. 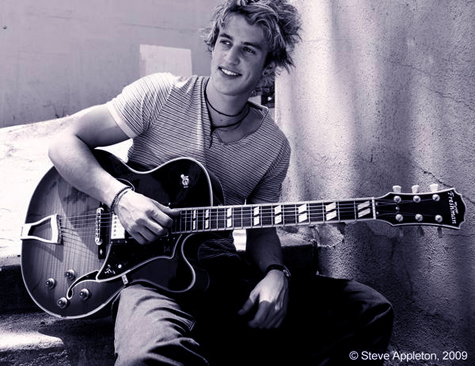 Have you got to meet any of your musical idols thus far?
I haven't actually. A lot of my idols are from another generation. Elton John is an idol. A lot of them are dead unfortunatley – Bob Marley, Jimi Hendrix. Michael Jackson was an idol. I had plans to see him at the O2…a shame. John Mayer is another idol. Jason Mraz – I'd love to meet him.

Well that's all Steve – before we sign off any parting words for our readers?
Hope to see you all out there soon on tour. Playing live music is the perk of my job – playing the music that I wrote in my bedroom and performing on stage is just the best feeling, so hopefully see everyone soon!

"City Won't Sleep" is released on August 16th and the album "When The Sun Comes Up" is out on August 31st.