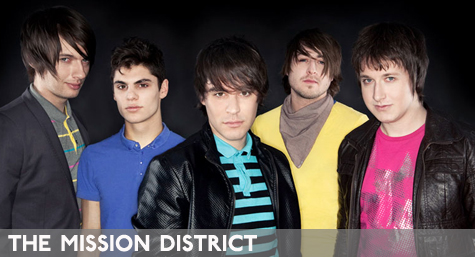 Canada is putting out some mighty fine music these days and The Mission District sit firmly at the top of of Montreal's list of breakout bands this year.  As you know, I'm not much into the rock/indie genre but The Mission District do it in a way that's appealing and provocative – even to a electropop lover like myself.
Maybe it's because you can feel the 80's influence in their tracks.  Maybe it's because when you take a hot synthy pop track like "So Over You" and give it the Starsmith treatment, it sounds rather amazing.  Both "So Over You" and "Heartbreaker" are being serviced to the UK and US markets and it won't be long now before The Mission District invade the UK on a national tour starting in April.  You can bet I'll be there jumping around and waving my hands around like a loon with the rest of the kids when they hit up Londontown.
Take a listen to them over on MySpace.  Think The Killers.  Think The White Tie Affair.  Right on the rock cusp but not annoyingly so – which makes them utterly listenable and relevant to my ears.
And if The Mission District keep on mixing up their tunes with some of the hottest electro mixmeisters like they currently are, then hey, this EQ is a fan for life.  Did I mention Frankmusik is mixing em up as well?  Nuff said.