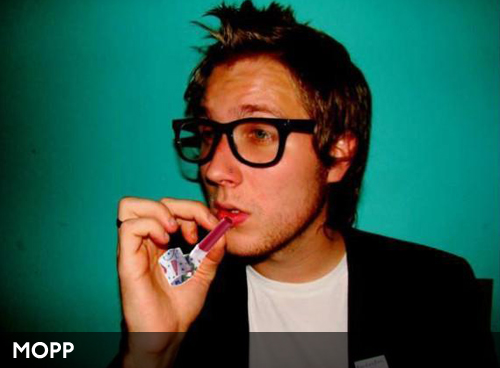 I have just found out about Mopp via the lovely people at Record Of The Day and I can honestly say, I'm quite hooked on his killer electronic pop.  Take one listen to his track "Dream About You" and I double-daisy-dare-you not to say "wow – that shit has killer potential".  His collaborations with his mates Stevie and Beth only go on to prove that he's an all-round versatile producer – "Only Way" ft. Stevie is basically the kind of track that The Killers should be making…

Mopp's tracks have all the sophistication of Frankmusik with a special intensity that can only be felt in a Tiesto crescendo – and being that the superstar DJ is one of Mopp's major influences (alongside anyone named Rick), one can easily feel that upon first listen.

What I love about Mopp's MySpace profile is his silly little bio that reads;

"Mopp is a producer and musician from a horrible little village called Alloa near Glasgow in Scotland. Aside this terrible affliction he still manages to enjoy life through the power of music."

Lovely and simple – discover Mopp on MySpace for yourself…obsession brewing.