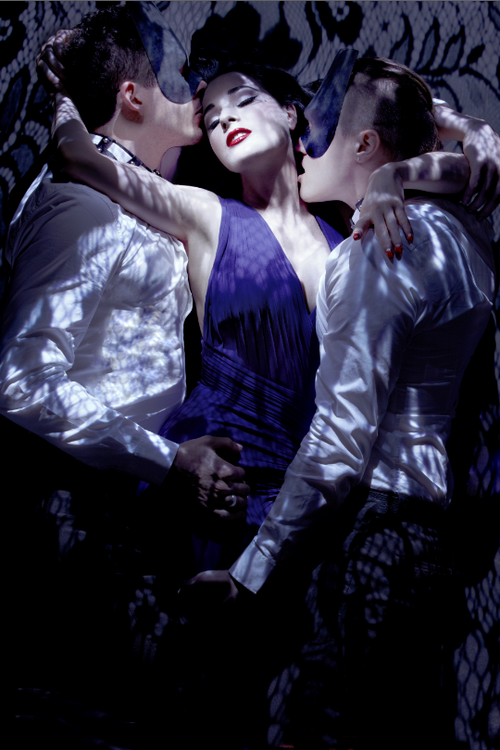 Oh WOWEE if the steam rising off this will allow, would you LOOK at this press shot! isn’t it rather scandalously sex-ay, in an “Eyes Wide
Shut” kind of way!  and its all
because……  Electro pop titans Monarchy
will be opening up the New Year with an exciting venture.

The super hot electro maestros have scored themselves a
super-fan in international muse Dita von Teese, friendship has blossomed
betwixt all parties and they have conjured up a tune for the sensual siren
called “Disintegration” that will make it’s way to digital outlets mid January
2013.

In prelude to release of the track; Monarchy reveal that
“the song is about losing the self in a moment, in a love affair, in a partner,
drawing from a metaphor of “le Petit mort” that post sex moment where the mind
goes blank, as a symbol of the larger loss of self in a relationship”.  Hmmmm quite the thought there! Anyway, we’re
confident that it’ll be the stuff that electro dreams are made of with Monarchy
at the steer of it.

Also the video is to see Dita portray the classic 1950’s
housewife escaping the monotony of her marriage through sexual fantasy…. Allo,
allo lightbulb!  haven’t synth slayers
Parralox just had a similar story idea for their freshly released video to
“Sharper Than A Knife”!  oh well, it’s a
retro fantastic idea I’m sure both electro duo’s have seen that it’s turned out
with both their usual stunning panache.

We await with steamy baited breath for further Monarchy and
Dita updates…….