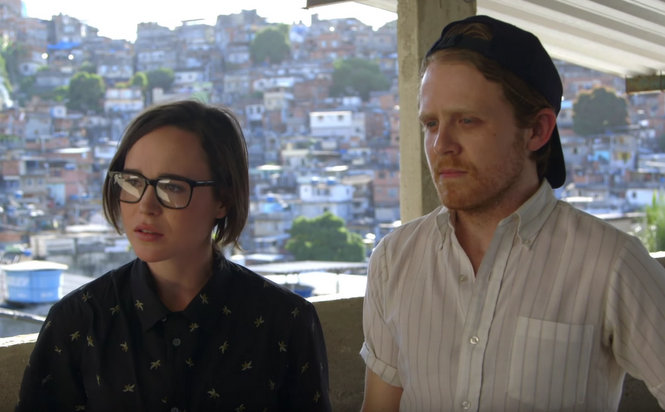 I’m not going to lie, I was VERY familiar with ‘Gaycation’ before I saw Ellen Page and Ian Daniel give a film keynote talk at SXSW. But after hearing Ellen and Daniel describe how the met, became best friends and how their artistic visions led them to fully realise ‘Gaycation’, this only fuelled my interest in supporting the gay travel show which can be viewed online at VICELAND.

‘Gaycation’ is more than just Ellen and Daniel visiting a few gay bars abroad. It’s more than just the beauty and glamour of the circuit parties. What ‘Gaycation’ does is that it takes you into the unknown, the repressed and the downright terrifying parts of gay culture abroad that will in some scenes, send shivers down your spine.

After watching Episode 1 on YouTube which takes the dynamic duo to Japan, I was left with a deeper understanding of what shame and desolation LGBTQ people can feel in other cultures. Sure, America and the UK have some amazing progressive laws that protect folk like us these days, but being queer in other parts of the world, doesn’t exactly have the same mainstream ‘Will & Grace’ effect we enjoy living in more “liberated” countries.

For example, there is a scene in Episode 1 that will no doubt make you cry. A young man hires a “friend service” to help him come out to his mother since he doesn’t have other trusty friends that will give him a shoulder to lean on in this sticky situation. This scene is heart-wrenching to say the least and hearing how Ellen and Daniel describe it just makes you realise that not every one has the support network they need when it comes to coming out of a padlocked closet.

In Episode 2, shot in Brazil, there is scene where Ellen and Daniel are face-to-face with a serial killer cop of LGBTQ people, who unnervingly describes his motivations for killing gay people which is just bone-chilling. You can literally feel Ellen trying to find a way to gracefully leave the situation – a situation that I give her a standing ovation for, as even volunteering to speak to such a despicable human being goes beyond standing up for your community. That’s an act of valor.

I absolutely urge you to check out ‘Gaycation’ online as it’s a moving, informative and downright daring documentary that explores the other side of queer culture that the mainstream doesn’t exactly want to scare you with…

Check out Ellen and Daniel’s full keynote SXSW talk below. I was in the audience!