Dear readers – You all know my interview style by now.  Questions then answers prefaced by a brief introduction.  But when Parralox rolled into London for their VERY FIRST gig as Parralox at Electronically Yours last week (and may I add – it was just awesome), I thought it would be a bit of fun to take John and Roxy out for some warm lattes at the local neighborhood Starbucks for a chinwag about all things wonderful and exciting in the world of Parralox.

I'll have you know that I have been chastized for not writing about Parralox previously on EQ, but rest assured that I am a huge fan of the Australian duo and I think their album "Electricity" is "beyond" brilliant – it's one of my favourite electro albums to ever be released actually (yes, ever)  and you most certainly can quote me on that.  Besides, I was saving my thoughts on Parralox for this massive post anyways!
So what happened on that cold wintery London evening when EQ met Parralox you ask?  Well here are some highlights from my encounter with the talented electro duo from down under!  Enjoy!
When I asked John and Roxy how they met, they told me that they have been working together for "many many many" years – at least ten to be precise!  They both have worked with Australian musician named Johnny X who was responsible for some of Gina G's big hits. Now there is a blast from the past for you!
John is another band called The Tenth Stage that he describes as "steampunk/dark-cabaret". While in this band John wrote the song "Factory Friends" which didn't quite work for them, but it eventually became a Parralox song because he had the "electro itch inside him" (don't we all love). When he wrote "I Fell In Love With A Drum Machine" that is when he brought in Roxy to do the vocals because he needed someone "beautiful with a great voice" to do the vocals!  And thus, Parralox was born!  And I must say, they are quite the sexy combo.  Great strategy John!
In coming up for the band name, John wanted to have a name with an "x" in it because bands that have an "x" in the name always sounds cool.  I would say that's a rather fair statement too.  So after the name "Parralox" was decided, John thought he had picked out something completley original, but later found out that it was the name of an episode from Absolutley Fabulous – "the episode with the botox!" proudly exclaims John – who owns the entire series on DVD.  The band hopes they don't get sued by the BBC should they ever make into the UK Charts!
John and Roxy were both very pleased with their first gig at Electronically Yours.  John stated that he was "Absolutely thrilled.  People traveled from Dublin and Finland just to see Parralox play!". When asked about the crowd energy in the room, they were amazed that people knew the words to the songs as they have only been together as a band since February.  That really goes to prove that the internet is instrumental in finding fans that totally "get" the sort of music they produce.
Although Parralox only started recording "Electricity" in February, it was available in September as a finished product!   Talk about quick turnaround!  The band went onto to explain that they both work extremely quickly in the studio and really churn out the work.  Later in the conversation, Roxy and John joked that they only need a few days to record the second album…EQ jokingly advised them to take their time and to give it a few weeks!
Overall, John and Roxy are very pleased with the album.  The only doubt they had about it was having 15 tracks on it (18 on the deluxe version), therefore breaking the album rule of 10-12 tracks.  But in the end, they were so happy with the tracks that they decided to break the mold and give the fans everything.  And personally, I don't see anything wrong with that – you definitely get your money's worth with "Electricity".  I think you'll start seeing a lot of other bands follow suit.
Roxy explained that "Sharper Than a Knife" and "Electricity" are her favourite songs from the album. "Europa" was also a blast for Roxy to sing because when they recorded the chorus – it was in 18 different layers which gave the song an "operatic feel". 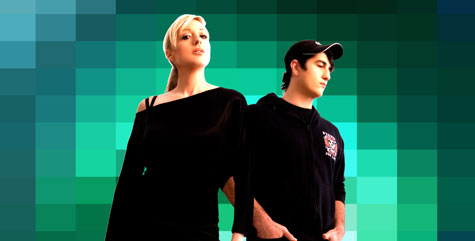 In choosing a cover song for the album, they toyed with the idea of doing something by the likes of Pet Shop Boys and Depeche Mode but didn't want to in the end as to "not set them up for failure".  They also didn't want to make the genre too obvious, so they thought "Creep" by Radiohead would be "ironic" as a rock cover in an electro format.  Actually, Roxy wasn't convinced to sing "Creep" initially, but when she went into the studio and heard John's rough track, she was like "hey that's really cool".  After the song was finished, she loved the contrast of her female vocal singing male lyrics and I must say – it turned out genius.  I actually loved the feeling of recognizing the song when I was previewing the album.
I asked John when he came out of the closet as an "electronic music geek" and he responded precisely as it being "in December of 1982 on a saturday afternoon in front of a quadapronic stereo". How precise is that!  When he first heard the classic tune, "The Things That Dreams Are Made From" by Human League he officially was ordained as an electronic music geek.  John's father introduced him to his lust for technology and he finds that electronic music is "the perfect fusion of music and technology.  In finding this, I found something very profound."  Roxy then joked that John has all sorts of weird electronic gadgets and wires in the studio and vocal booth that really freak her out.
When asked Roxy about her favourite music of the moment, Roxy admitted that she's a "pop tragic from way back", who was massively into Madonna and Michael Jackson.  She just loves lush production in music.  Some of her first memories of falling in love with lush production was when her mother bought her a lime green walkman from Hong Kong – that she admitted having being hung from a basket next to her bed!  Roxy also loves jazz music as well.  Her dad used to play classical music to them during dinner and make them guess the instruments that were being played.  Roxy's mother was also really keen for her to get classically trained in singing which would explain Roxy's diverse vocal style on the album.
One of the stranger questions I asked during our coffee talk was "What is your favourite Thompson Twins song"?  John's ears perked up and he explained that "Love On Your Side" the Rap Boy Rap Remix was his favourite.  He also loves "Doctor Doctor", "Watching", "Runaway", "Don't Mess With Doctor Dream", "Lay Your Hands On Me" (he even sung a bit of this to me), "Judy Do", and "You Take Me Up". John thinks that "Into The Gap" is totally underrated!
Parralox says "If it wasn't for the blogs, they wouldn't be here" – And he's not "pissing in our pockets either" (that must be an Aussie term, I think it's funny!).  The internet and blogs have allowed them to reach out and find fans very quickly and it also has allowed them to be "entirely in control of the creavite process".
John and Roxy are both very Interested in exploring film and TV avenues as well as they think the publishing of songs is of utmost importance now.  A production company in Baltimore is working on a web based series called "Life After Lisa" which features the songs of Parralox. Some of the Parralox lyrics are even used in quotations on the show – how cool is that.
Do Parralox have day jobs?  Of course they do! Roxy teaches two year old pre-schoolers music and is gearing them up for their big Christmas concert.  John also works as a nurse part time and let me tell you ladies and gentleman, he does have nice big hands.  You would be so lucky to be one of John's patients in Australia.  I jest, John also owns his own recording studio that he runs full time as well.  Busy group they are – "it's all about balance" explains Roxy.
The "Sharper Than A Knife" video clip being finished very shortly alongside the EP which is expected to drop in February.  They recently had a remix contest in which they had 170 remixes submitted to them! John laughed and said it was "like hell going through all of them" but is beyond overjoyed that there has been so much interest in remixing Parralox!
Roxy is the voice of reason within the group.  John admits to having "flights of fancy" when in the studio with him being the nerdy electro geek and all.
Parralox isn't keen on being just a "one trick pony" either.  They both think that having good songs is more important rather than just being an 80's influenced electro band.  Sorta in the vein of what Goldfrapp recently did with their latest album.
What's next for Parralox?  Well their agenda for next year is to record a secon album.  And they have already leaked a new song to fans called "Miss You" on the website that has already been featured on this years Big Brother Australia.

And that's it.  It's all glamour and champagne for us hanging out at Starbucks isn't it!  I immensely enjoyed meeting Parralox and you can bet that EQ will be supporting them heavily in 2009.  One of the nicest and most down-to-earth bands I've ever interviewed actually.  I hope to see them again sometime and possibly get them on the EQ stage for you as well.
Do me and Parralox the hugest favour and take a moment to purchase "Electricity" on

right now.  My favourite tracks on the album definitely are "X Minus One" and "Underground" for that New York 80's electro influence and "Black Jeans" because it's sassy and well, I wear black jeans almost everyday.  I also adore "I Fell in Love With A Drum Machine" as it's truly a masterclass in electronica. "Europa" is just gorgeous too. It's unashemedly euro and poptastic.
Oh yes Parralox – EQ has fallen in love with you and your drum machines…
Parralox on MySpace
Parralox on Facebook
Official Website