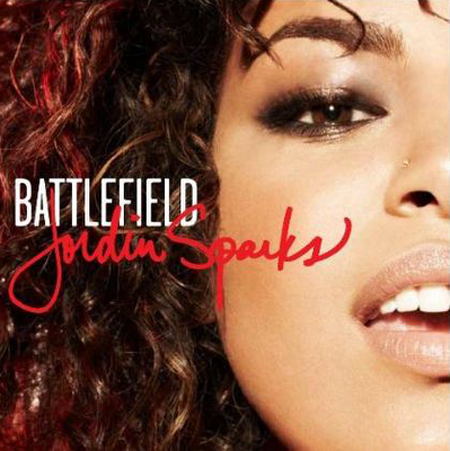 "I just have one thing to say about promise rings. It’s not bad to wear a promise ring because not everybody – guy or girl – wants to be a slut." – Jordin Sparks (September 7, 2008)

American Idol Season Six winner Jordin Sparks is out to set an example to young girls and she makes no apologies about it.  She very publicly defended the choice of chastity at the 2008 MTV Video Music Awards after host Russell Brand had some distasteful things to say about the matter.  Sparks is now back with her sophomore effort Battlefield, to be released July 20th/21st respectively in the UK and North America through Jive and RCA Records.  The album places Sparks' powerful vocals front and center, as the world watches the 20 year-old pop star grow-up, dealing with issues about male infidelity, on-and-off relationships and break-ups.

What makes this album interesting is that quite simply, it is pure middle-of-the-road pop, whereas much of the Billboard Hot 100 nowadays is occupied by urban and rock acts.  Despite this, Sparks still manages to maintain a strong chart presence.  This is even more impressive considering how America has seen many of its voted "Idols" disappoint commercially and subsequently get dropped by their labels.  Sparks' label has given her their vote of confidence as a songwriter, featuring four of her self-penned tracks on Battlefield.

The album opens with the mid-tempo Walking on Snow where Sparks' upper range soars beautifully with Mariah/Beyoncé-like prowess…. sans all the adage.  Singer-songwriter Ryan Tedder, a hit-making machine in his own right, is responsible for the album's title track.  Despite much early buzz from the online community, the song seems to be stalling on the Billboard Hot 100.

The album's hopes appear to lie however, in second single S.O.S. and its chorus sampled directly from Shannon's classic Let The Music Play.  The irresistible track is a step onto Rihanna's dance pop turf and coincidentally, she too had success with a track of the same name not too long ago.  One weak point is that Sparks gets lost in lyrical passive-aggressiveness.  The song's verses allude to a big confrontation  ahead with the song being about a girl angrily watching her boyfriend with another girl on the dance floor.  Finally, the girl is advised to do no more than just "let the music play" in the chorus (a major let down for us drama seekers!).  This is not a real surprise though, considering Sparks' good girl persona.

No Parade is unquestionably the album's shining moment.  The stunning ballad has Sparks truly emoting as she realistically accounts how break-ups sometimes can end without fanfare and closure in real life.  Surprisingly, Canadian singer-songwriter Fefe Dobson, whom I can call an acquaintance, contributed the track Don't Let It Go To Your Head to this album.  It was originally to appear on Dobson's sophomore album Sunday Love a few years ago, before the album suffered an ill fate at the hands of Island Records.  Sparks' rendition is refined and glossy, whereas Dobson's version of the track was more Joan Jett-raw.  Let It Rain shows immense power and range, placing Sparks almost in the same category as greats P!nk and Kelly Clarkson.  Where Sparks falls short slightly, is that she is still missing that extra bit of emotional depth at this stage in her career, which those artists already possess.

In all, Battlefield is a fine follow-up effort to Sparks' self-titled debut.  Although, it is definitely lacking in the area of up-tempo tracks that would secure her a place on Top 40 radio, the quality of the songs are undeniable.  To learn more about Jordin Sparks, visit her Myspace page.