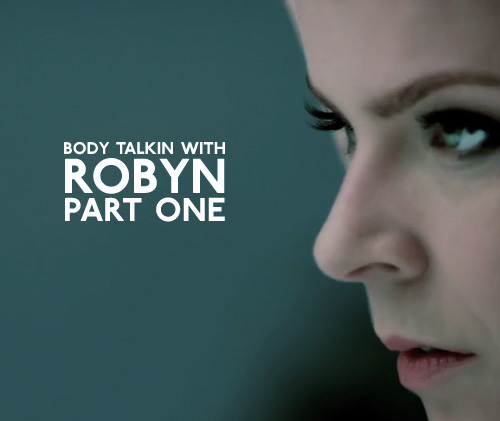 It’s no secret that were huge Robyn fans here at EQ.  So you can imagine our delight when Robyn announced three new albums this year!  We’ve already been amazed at “Body Talk Part 1” and it’s lead single “Dancing On My Own” is truly one of the greatest electronic pop songs to be released in 2010.  So to commemorate our obsession with Robyn, we’ll be releasing a three part interview series this year with the Swedish powerhouse to talk about all things in her crazy pop world and the extraordinary journey she will embark on in promoting her fantastic new music.

I’m just swell – thanks for taking the time to chat with us. Now over the past few years, you really worked hard on your “Robyn” album, you toured the world, did lots of videos and gigs and even ended up with a UK Number One.  After so much has happened with that album, how does it feel now to have a new album out for “Body Talk Part 1”?
It feels great of course.  I mean being in the studio and recording is one of my favorite things to do and I was really happy to start working on the new album after working on the last one for so long.  I have to say though that even though I promoted the last album for about five years, I still thought it was an interesting and amazing experience all the way up until the end because of the audience that I was able to connect to both in the UK and in the States – and Germany and Austria as well – it’s been a fantastic period.  But of course working on the new album was way overdue.  Not being able to make another album in five years was a little depressing to me.  So I started thinking about a way to deal with this and the solution of releasing the album in parts.  I found it really interesting to do that, both for myself but also for my listeners.  I think a lot of people consume music in a different way than before.  It’s not an unusual thought anymore that you can release an album in a new format.  It’s also a way of keeping it fresh because once these songs are done, they are released.  Y’know, I think it’s a logical solution and I’m really excited about going forward and working in this new way…

I’m very excited that you are working in this new way as well.  Now “Hang With Me” is my favourite song off “Body Talk Part 1”.  It really reminds me of the beauty that you captured with “Be Mine”.  Can you tell us a little bit about “Hang With Me”?  Are the two songs related?
Well all songs that I sing and write are based on emotions that I’ve experienced myself or in some way, connect to emotionally.  But they are very rarely about one particular situation.  I think in life you go through all kinds of emotions, even when you are not a very specific situation.  For me, “Dancing On My Own” for example – even though I’ve definitely been in that situation…she’s not a victim this girl.  She’s in this club dealing with what she’s feeling and even though he’s not there dancing with her, she’s gonna dance on her own and let off some steam and be in touch with herself.  I think that’s what “Hang With Me” is about too in a way.  It’s about that period in the beginning of a relationship where you don’t know where you stand.  Sometimes, even myself whose been in a relationship for eight years – we go through periods like that.  In existing relationships too http://zxlcreative.blogs.com/electroqueer/2010/09/body-talking-with-robyn-part-two-.html you are in touch with certain emotions that you can remember from another time in your life or stuff that you experience again with someone that you’ve been with for a long time.  So for me, I can’t say it’s about a particular situation.  All songs I write are about emotions and sometimes they surface watching other people go through things or remembering stuff you’ve been through yourself.  I think pop music is about telling stories.  It’s about describing life in a way that other people can connect to.  It’s like an enhanced reality in a way.

I LOVE the fact that you are releasing albums this year.  What are your thoughts on the EP versus album debate.  Is the EP an under-rated format of music?  You seem to like the EP format don’t you?
I’ve been really cautious not to call the new album an EP – because it isn’t!  It’s actually an album. If you go back and look at the length of albums, like twenty or thirty years ago, they were never more than ten songs. So for me, they are all albums – there are eight songs on each album.  And I felt like the length of it really wasn’t the most important thing.  For me, it’s one album released in parts.  It’s also a way to keep myself in the studio while I’m touring!