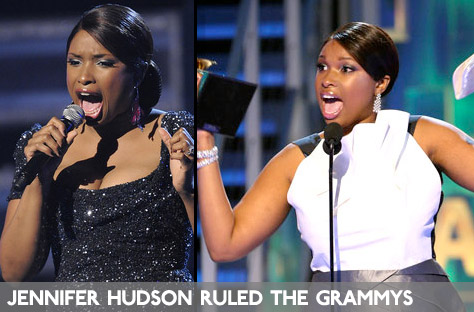 First of all, I must say how proud we are of our friend Arjan for being selected by The Recording Academy as their first-ever official blogger on Grammy.com.  I've been glued in alternating motion to my television set and monitor with Arjan's to-the-minute Twitter updates from the Staples Centre Media Room.

For those of you who missed the show, here are some EQ highlights from tonight's show:

– According to Arjan's Twitter updates, Robyn attended the Grammy pre-show and missed the announcement of the winner in the category she was nominated, "Best Electronic/Dance Album" for her positively epic "Robyn" album.  Unfortunately our beloved Swede lost out to Daft Punk for their "Alive 2007" album, but we are nonetheless proud of her for making it this far.  Arjan had the opportunity to ask Robyn herself how she felt about the loss, and she replied, "don't worry about it."  It was a tough category though, with Kylie and Cyndi Lauper also being nominated here.  Daft Punk picked up a Grammy for "Best Dance Recording" with "Harder Better Faster Stronger", which was aided in terms of exposure by Kanye West's sampling of the track on his "Stronger".  The track beat-out among others, Lady Gaga's "Just Dance" and Sam Sparro's "Black and Gold".

- Kanye West and Estelle rockin' "American Boy" on stage in matching glittery silver outfits.  The track picked up a Grammy for "Best Rap/Sung Collaboration" during the Grammys pre-show.

– Estelle warmly embracing Adele upon presenting her the Grammy for "Best New Artist".  Wait a second, did our eyes just fool us?  Wasn't it Estelle who very publicly proclaimed this past summer that Adele "ain't soul"?   A humble Adele then confessed her love for co-nominee Duffy and get this, The Jonas Brothers, during her speech.  She picked up another Grammy later in the evening for "Best Female Pop Vocal Performance" with"Chasing Pavements".  Impressive.  Adele's cute black dress and green bolero were hand-picked by Vogue's Anna Wintour.

– A perhaps too maturely-dressed Duffy co-presenting and harmonizing with Al Green.  The two presented the "Song of the Year" award to Coldplay for "Viva La Vida", which has been plagued by famed guitarist Joe Satriani's persistent claims of plagiarism in the press.  Duffy also won a deserved Grammy for her album "Rockferry" in the "Best Pop Vocal Album" category.  Our British friends must be proud!

– Although both Raj and I generally were unimpressed with Jennifer Hudson's debut album, she was awarded "Best R&B Album", receiving a standing ovation from the audience.  This followed her heartfelt delivery of "You Pulled Me Through", which had her overcome with emotion before she could finish the song in what was clearly the most memorable moment of the night.  We love J-Hud, but what else is there to accomplish when she's won it all this early in her career?  Oscar.  Grammy.  What next, President? (smile)

–Katy Perry's much-hyped performance of "I Kissed a Girl" was done against a backdrop of fan-made videos and her signature fruits motif as part of the annual "My Grammy Moment".  The segment allows viewers to interact and be a part of the fun; last year's edition saw fans get up on-stage to duet with Justin Timberlake.  Perry's brand of flritatious wit however, seemed to go over the heads of the more conservative Grammys crowd.

– We must say, Whitney Houston is looking on-point.  We realize how hard it was getting to where she is right now, so we are rooting even more for her comeback. Don't let us down, "Ms. My Name Is Not Susan"!

-A nine months pregnant M.I.A. performing a snippet of her breakthrough single "Paper Planes" before being joined onstage by Jay-Z, Kanye West and T.I., performing the former's "Swagger Like Us".

-The big story of the night was the noticeable absence of pop music's hottest couple Rihanna and Chris Brown.  Earlier in the day, Chris Brown had turned himself in to authorities to be questioned about an alleged domestic battery incident involving an unnamed female, which had occurred after he and Rihanna were seen leaving music mogul Clive Davis' Grammy Bash together.  In the U.S., female assault victims have the option of not releasing their names.  We're sure many of you can put one and one together.  Sad.

For a complete list of winners, please visit the official Grammy site.