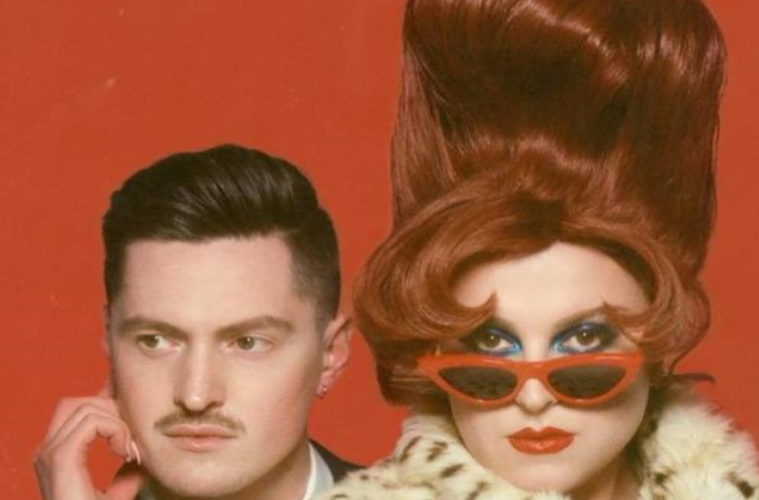 There is a fantastical, off-kilter debut album coming to your eardrums very soon, from transatlantic duo BHuman. If you’re thinking they are looking quite, absolutely fabulous in their press shot you’d be right in these assumptions. Transgender Londoner, Billie Lloyd, and gay New Yorker, Harrison Scott are aiming to run the world with their upcoming long-player release. The truth about this pairing is, they are about to be bringing something decidedly different to the table. I am only going to elaborate further that the album, titled “BMovie” is the most fun listen I’ve come across all year. Far in between being fun and sci-fi otherworldly, there’s human emotion at its core, in the lyrics and cutting through the arrangements formed of sound samples plucked from 50s Sci-fi and horror movies.

Outwardly, the duo may appear slightly off-beat and on the wacky side. Going beyond the tuxedo and the bouffant beehive hairdo, Lloyd and Scott, sure do know a thing or two about what makes a good electronic-pop track. Before we get to settle into the album which arrives later this month, the twosome has put their own stamp on Cher’s own futuristic dance-pop slayer “Believe.” Of course, they couldn’t just leave the reimagining there, they have taken the concept right through to the music video. Where we see them seemingly stepping into the shoes of special agents Mulder and Scully from 90s science fiction TV drama series, The X Files.

After giving the video a few spins, I have come to the conclusion I really DO like the kitsch vibe, the duo is going with after all. The song and the clip are certainly making feel nostalgic for re-runs of dark and surreal TV programs like The Mighty Boosh and The League of Gentlemen. Programs on the fringe off of comedy, satire and reality. BHuman have reawakened my quirky gene with their spacey sounds enough to conclude. That, if you’re obsessed with sci-fi, fantasy movies, digitalised sounds straight out of the 80s and 90s you’ll be happy you have discovered BHuman on EQ Music Blog, today.