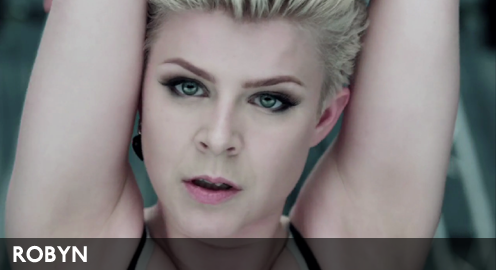 Body Talking With Robyn Part 3 – “We didn’t realize that we’d written a song that could be interpreted as an HIV, gay anthem or anything…”

It’s day three of Robyn Takeover Week here at EQ and as you would expect, we have some more exclusive interview footage with Robyn.  In this third segment, the tiny but mighty pop powerhouse talks about the concept for the “Body Talk” artwork, touring with Kelis, how she came up with brilliant track “Love Kills” and what it’s like working with Snoop Dog.

If you haven’t bought “Body Talk Part Two” yet, make sure to grab it on iTunes and you can follow all our Robyn Takeover Week coverage on this link.

EQ: Talk me through the artwork for “Body Talk Part 2” – it was a very cool concept.
Robyn: Well we shot all the covers at the same time. It was shot in Sweden. Me and my friend Mary Furgo have worked together on all the visual concepts for this album project. We also decided to work with an artist called Lucy McGray – she used to be a dancer, then she became an architect then she became an artist. She does something that is called “body architecture” in which she experiments with the constitution of the human body and movement. She creates these beautiful things that she puts on herself and other people that’s fun and playful, but it’s also very smart and interesting. So we worked with her and she’s the one who made the paper things and it was shot by Johan Rank who also did the “Handle Me” video. I wanted to shoot all three of the covers at the same time to tie them together. All the visuals that we did on print, even the first promo cover that had the logo with all the different stuff, it’s something that we could have done in post, but we wanted it to look real. Even though it has a modern feel to it and has a reference to technology, I wanted it to feel kinda lo-fi and real. I think the covers have that too. You know how the CD looks like a CD-R – it’s just really cool.

What was it like touring the US with Kelis?
It went really really well. I was like so blown away by the audiences we were performing for. I think both our audiences liked the fact that we were touring together. We both try to make pop music in an unexpected way and we both like making music that feels real. It really resonated well with the crowds. I never experienced any crowd like that before – it was really nice.

It really seemed like the perfect pop pairing of two powerhouses getting together…What’s Kelis like?
Yeah it was great – it was a really cool time. Kelis is a great girl. She’s really super nice and down-to-earth. She’s a cool chic – she knows what she likes and we had some good times!

My favorite song on “Body Talk Part 2” definitely is “Love Kills”. Can you tell me what you were thinking when you were writing that song?
Well I stated on the song originally with a producer/duo on the club scene in Stockholm called Savage Skulls. Originally it sounded different so we decided to re-work it.  We really didn’t realize that we’d written a song that could totally be like interpreted as an HIV, gay anthem or anything [Laughs and slumps down in her chair]. You know how the song goes…(Robyn starts singing) “Protect yourself or you’ll wreck yourself, cuz you know that Love Kills”…[laughs some more]…it’s like super dramatic and we were like “what did we just write!”

Wow – I didn’t quite get that from the song, but now you’ve given me a whole new meaning!
Neither did we until it was done! I loved that it had that reference because the production was going in that direction anyways even before we wrote the lyrics. You know I grew up with dance music in the 90s with like The KLF, Robin S and Snap! and all those artists have something quite dramatic about their songs, so I wanted to do something that was quite dramatic and dark. So when we came up with the song title “Love Kills” it just totally grew from there! I love that it has that layer to it.

You worked with Snoop on “U Should Know Better” – what’s it like being in the studio with him? Is he really as laid back and cool as he seems on TV or is he different in the studio?
Yeah – he’s super cool and very down-to-earth, sensitive and very intelligent and he loves music. He’s a real music lover – that’s how we connected and that’s how we decided to work together. He’s really open to try stuff and we tried a lot of different ideas.