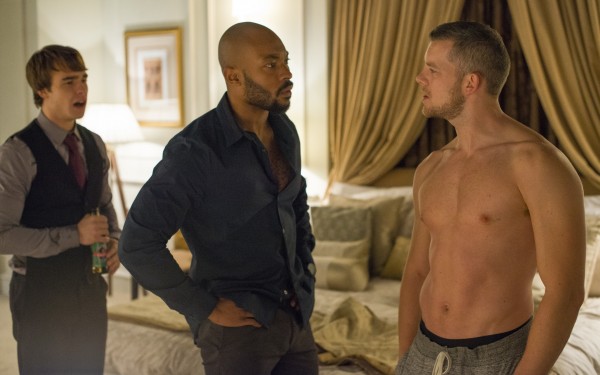 Make no mistake, if you’re a fan of Russell Tovey and his awkwardly adorable acting (and cute dumbo ears) – spanning from Being Human to Looking – you’re probably going to love The Pass from director Ben A. Williams.

Yes, yes, yes – let’s get this out there right now, Tovey’s character is mostly shirtless in his tighty whities (which is guaranteed to put a good amount of butts in seats), but The Pass is more than just a bit of gratuitous eye candy, it’s also a deeply emotional look at shame, popularity, ego, deceit and a yearning for something more real than what we have.

What’s it all about? Basically, it’s a three-act play on-screen, set in different hotel rooms and it works extremely well. Scene one introduces our two main characters Jason and Ade sharing a room in Romania on a football trip which has some hilariously fun (and some cringeworthy) banter. The two share an unexpected kiss which serves as the basis for the story, as complicated as it will be for the years to come. Scene two sees Jason years later, finding fortune and fame as a celebrated London footballer entertaining a lady friend who has a little bit of an alternative agenda up her sleeve, whilst the final act sees Jason and Ade reunited many years later for one big blast-out and to catch up to perhaps reignite the flame, shatter egos and get straight down to the matter at hand that separated the two…the pass.

How did I feel? Pretty warm inside. The dialogue here is the centrepiece of the film and seeing this story unfold over the years in just three scenes creates a strong feeling of investment in the characters. Think of it as a short-form version of Boyhood perhaps where you learn a lot about a characters coming-of-age and their inner struggles while facing something they don’t quite know how to deal with. This film speaks volumes about homophobia in sport too and what gay athletes have had to overcome to sustain their careers over the years – even if only told through one man’s journey.

The Pass hits theatres December 9th and I encourage anyone who loves a bit of indie movie house magic, to definitely go and see this one on it’s first run.