It is safe to say Danish alternative pop artist Kill J hasn’t felt the urgent need to rush into putting together her debut album. She has spent some time testing the waters with individual single track and EP releases first. As her fans have grown in number. We have just become hungrier and hungrier for the singer to realise a full-bodied album experience. We no longer have to wait for the long player’s arrival. The science inspired debut album “Superposition” is here. 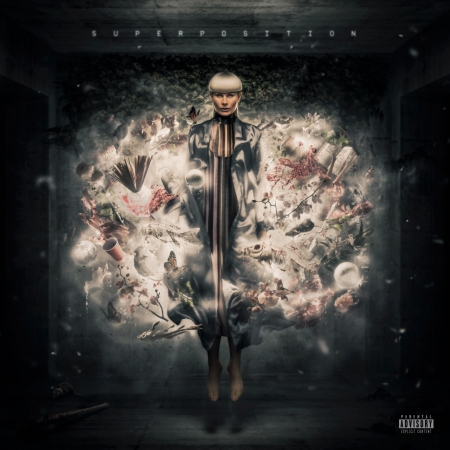 The album’s title is a nod to the Superposition theory. A principle used by physicists and engineers in their work. What the uninitiated, myself included, need to understand about this rather bold statement and curious title. Without getting too involved, it means moving something from its place or position. For example, taking a sound and putting it into a quite different situation. Now that pretty much sounds like the Kill J style we’ve become accustomed to listening too, doesn’t it?

Kill J has given us otherworldliness in her music before, but on, “Superposition” we get the unabashed, epically proportioned effort. The full works. Sonic endowed soundscapes. Tangles of percussion. Realising off-kilter beats, interesting intricate textures and layers. While at all times unique, her eclectically rich voice cuts in taking command emboldened with soft and haunting dynamics. Theatrics are set in place on this soundtrack, I hasten to imagine long before they grow into seeds of ideas for music videos and visuals. Also prevalent is the Danish multi-talents poetic lyrical style. There really are many facets to immerse ourselves in. The album is a world away from the mainstream collections which litter the top forty pop charts. And, breathes enchantment at every turn.

From the opener “Entangled“. Taking a look at a love story which feels as though it is taking place dancing among the moonlit stars. We are taken on an onwards journey through space and time sculptured by artful musicality. Smart and sparkling lyricism addresses topics around areas of humanity, and the world around us (“Strange Fruits Of The Sea“). We are also given some insight into Kill J’s own personal battles (“Addicted“). “Dead Weight Soldier” is where she airs views about her professional life, head-on. Defying convention in her music is something which Kill J has chosen to do. We hear it running from the beginning to the end of “Superposition“. Appearing in the startling delivery, shivery electronics and thought-provoking content. It beams with intellect and elegance. As a music artist, she is uncompromising. Forges ahead on a trajectory of her own making. This is a debut album which is a testament to that.

“There are definitely noir elements in what I do, and also there are theatrical elements…. I don’t know if it’s the lack of sun or if it’s in the water, but I’ve just always gravitated towards that kind of thing”, she offers.